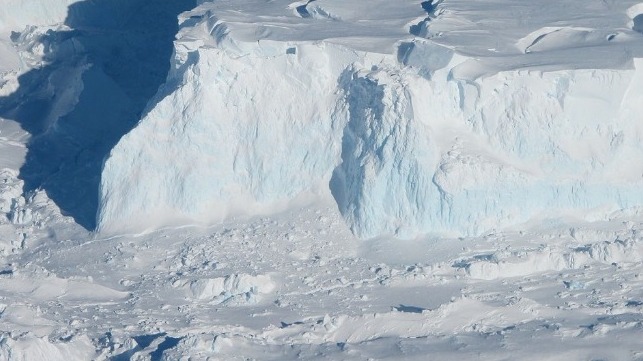 The U.S. and the UK are launching a multi-year, $25 million joint research campaign to study the Thwaites Glacier, a giant Antarctic ice sheet that has sped up its motion in recent years.

Scientists are concerned that if Thwaites and an adjacent, similar ice sheet were to collapse, it would raise sea levels by up to three feet. The Thwaites Glacier already accounts for about four percent of global sea level rise - an amount that has doubled since the mid-1990s, according to the U.S. National Science Foundation. Several studies have concluded that it is only a matter of time - very roughly, about 200-1000 years - before Thwaites and other nearby glaciers disappear into the sea. “A large sector of the West Antarctic ice sheet has gone into irreversible retreat,” said glaciologist Eric Rignot of the University of California at Irvine, speaking to the New Scientist in 2014. “The only thing that would stop it is a mountain where glaciers would have to climb uphill. We are fairly confident there’s no such hill or mountain.”

The newly-announced International Thwaites Glacier Collaboration (ITGC) will gather data to reduce uncertainty about the probability, magnitude and timing of a collapse. "To answer the key questions of how much and how quickly sea level will change requires scientists on the ground with sophisticated equipment collecting the data we need to measure rates of ice-volume or ice-mass change," said William Easterling, NSF's assistant director for geosciences. "The challenges of conducting fieldwork of this scope and scale in such remote locations are enormous. The only practical way for nations to do this is to work collaboratively, each bringing scientific and logistical resources to enable complex and comprehensive field studies."

The nearest major research station to the Thwaites Glacier is roughly 900 miles away, so transporting 100 participating scientists to the research site will take a significant joint effort from both nations. The logistics involved could double the cost of the project. Researchers on the ice will rely on aircraft support from U.K. and U.S. research stations, and oceanographers and geophysicists will approach the glacier from the sea aboard research icebreakers. One grant recipient intends to deploy an autonomous UAV, the Autosub Long Range, to explore the underside of the ice sheet from seaward.

The collaboration's scientists will begin their first research season in Antarctica in October, establishing a logistical support structure for future work. The collaboration will continue until 2021.