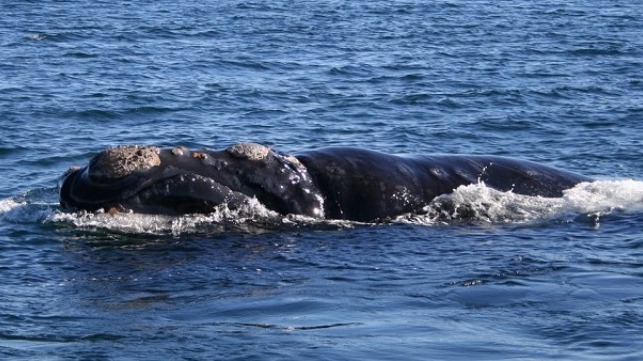 An attempt to establish a whale sanctuary in the South Atlantic at this week's International Whaling Commission meeting in Brazil has failed.

The proposal, which was first proposed in 1998 and has been discussed at previous IWC meetings, was introduced by the Government of Brazil and co-sponsored Argentina, Gabon and South Africa.

Wide-ranging discussions occurred with no decision reached, so a vote was taken. The result was 39 in favor and 25 against, with three abstentions. The required three-quarters majority was therefore not reached. Japan voted against the sanctuary, and, paradoxically, it was the Japanese delegation that had pushed for a rule change that would allow decisions to be made by simple majority instead of the current three-quarters majority. This would make it easier for Japan to gain a positive result for its plan to re-introduce sustainable whaling.

The Government of Brazil's Minister for Environment expressed disappointment in the result. His proposal stated that the South Atlantic Ocean was the scene of reckless slaughter of most of the species of large whales, not only by coastal whaling that goes back to early settlement times, but in more recent decades by pelagic fleets foreign to the region and largely detached from the South Atlantic nations' legitimate interests in the management of whale resources. Some of these fleets have consistently captured protected species.

Grettel Delgadillo, deputy director of Humane Society International-Latin America, says, "It's a bitter disappointment that – in Brazil of all places – the proposal for a South Atlantic whale sanctuary has once again been defeated by Japan and its allies. Brazil and the other champions of the sanctuary have made a strong and principled case, on ecological and scientific grounds. This first vote at IWC67 shows how determined the whaling nations are to oppose sensible conservation measures and to obstruct the IWC's evolution as a full-fledged conservation body. The rejection of the South Atlantic sanctuary is a genuine sign of bad faith and continuing intrigue by the Japan bloc, and it bodes very poorly for the crucial votes that will come later this week.

"The nations of the region want to create – and they have every right to create – a safe haven for whales under continued threats from commercial whaling, death from entanglement in fishing gear, marine pollution, and injury from ship strikes. The proposed South Atlantic whale sanctuary encompasses a vital breeding and calving area that would protect whales and their habitats. It's a common sense proposal directly informed by the fact that cetacean species and populations are still recovering from decades of merciless commercial whaling in the twentieth century."

Modern whaling has been seen as possibly the largest hunt in human history. It is estimated that approximately three million whales have been killed around the world between 1900-1999, from which about 71 percent were hunted in the southern hemisphere. Fin, sperm, blue, humpback, sei and mink whales were by far the most hunted species in the Southern Ocean (species-specific catches ranging from about 117,000 to 700,000), while catch numbers for right and Bryde’s whales are comparatively low (about 4,000 and 7,000, respectively). Together, the South Atlantic and Antarctic Oceans were host to a large proportion of these catches.

Around 50 species of cetaceans inhabit the waters of the South Atlantic Ocean. Six of these (blue, fin, sei, Antarctic minke, humpback and southern right whales) are highly migratory baleen whales that feed in the Antarctic and Subantarctic oceans during summer and breed in tropical, subtropical and temperate waters in winter and spring. Three of these species, the Bryde’s, pygmy right and common minke whales, present a more limited distribution and a less marked migratory pattern.

The sperm whale, a member of the toothed whale suborder, inhabits pelagic waters from tropical to polar environments. Breeding herds are restricted to tropical/subtropical waters north of 40ºS but mature males may migrate closer to the Antarctic continent. Sperm whales are also found in the South Atlantic Ocean basin, as well as many other smaller whale species.