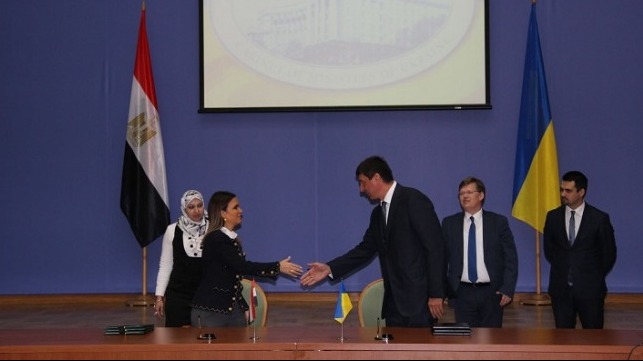 The Ukrainian Sea Ports Authority has signed a memorandum of cooperation with the port authorities of two Egyptian ports: Alexandria and Damietta. The agreement, signed in Kyiv in the Ukraine on November 2, involves the establishment of a bilateral working group with representatives of shipping lines, traders and port operators to stimulate the implementation of joint projects. It also provides for information exchange to assist shipping companies, importers, exporters and forwarders, exchange of experience in port modernization and the development of IT services and technologies.

Alexandria, situated in the Nile delta, is the main seaport and the second largest city in Egypt. The port is connected to the Nile by a navigable channel. Its annual turnover, 15 million tons, accounts for about 80 percent of the total volume of foreign trade in Egypt.

Port Damietta is located on the Mediterranean coast, east of Alexandria. It has terminals for general and bulk cargo. The port's capacity for handling grain is about 7.5 million tons. There is a LPG plant, a container terminal and a mineral fertilizer plant on the port territory.

The signing was held within the framework of the Seventh Meeting of the Intergovernmental Joint Commission on Economic, Scientific and Technical Cooperation between Ukraine and Egypt. From the Egyptian side, the Memorandum was signed by the Minister of Investment and International Cooperation of the Arab Republic of Egypt, HE Dr. Sahar Nasr, from the Ukrainian side – Head of Odessa branch of the USPA (Odessa Seaport Authority), Igor Tkachuk.

“The port of Odessa has a great experience of cooperation with the ports of Egypt,” said Tkachuk. “The cargo turnover between our ports is more than 4.5 million tons per year. More than half of these cargoes is export of agrarian products from Ukraine. The signing of the Memorandum will be an additional stimulus and a basis for the further development of bilateral cooperation.”

For the fourth year in a row, seaports of Ukraine have improved their positions in the Global Competitiveness Report 2018, compiled by the World Economic Forum. The port services and infrastructure of Ukraine ranked 77th in the latest version of the report. In 2017, Ukraine occupied the 93rd position.

In July, the Authority signed a memorandum of cooperation with Qatar Ports Management Company to increase cargo turnover between countries, in particular export supplies of Ukrainian agricultural products to Qatar, as well as attracting investments in the development of Ukrainian port infrastructure.