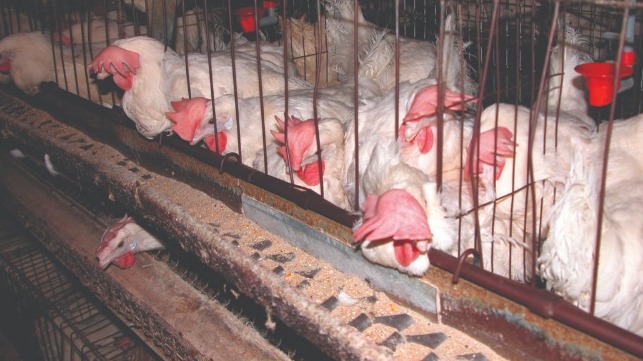 In a first for Australia, animal welfare will be on the agenda for free trade agreement negotiations with Europe which entered a second round this week.

Unlike Australia, the E.U. has a record of including language on animal welfare in its trade deals and the Treaty on the Functioning of the E.U. explicitly requires it.

Trading partners will usually seek to level playing fields in their free trade negotiations, and Humane Society International says that while far from perfect, farm animal welfare standards are generally higher in the E.U. than in Australia. The animal protection charity says this is an opportunity for Australia to lift its game.

The E.U. has banned conventional battery cages for laying hens, while these confinement systems remain legal in Australia. Around nine million laying hens here are still confined to cages that are so cramped that they are unable to perform natural behaviors including walking, perching, dust bathing, nesting or fully stretching their wings. Australia also allows routine cruelty, such as gestation crates, sheep mulesing and tail-docking.

Australia presently does not have any Federal legislation concerning animal welfare. Individual states do have prevention of cruelty legislation that rarely contains inherent farm animal welfare provisions, but a few states have incorporated national codes of practice.

"Any trade agreement negotiated with the E.U. should include meaningful provisions that create positive change for farm animals. Liberalizing trade may well be one of the key goals of these negotiations, but we believe that this should not be at the expense of the welfare of animals,” said Dr. Joanna Swabe, Senior Director for Public Affairs for Humane Society International in Europe.

"Compliance with E.U. animal welfare standards should be a requirement for placing Australian animal agricultural products on the E.U. market,” she said.

In 2017, over 35 million kilograms of meat was imported to the E.U. from Australia. Nearly half of that was beef, but sheep meat is also one of Australia’s major meat exports to the E.U.

Free trade agreements between Europe and each of Chile, South Korea, Canada and Mexico already include animal welfare provisions, and Humane Society International has detailed what standards it believes should be set. These include welfare for farmed cattle, pigs, sheep, poultry and the live export trade. The trade in live animals between E.U. Member States and Australia mainly concerns horses for breeding purposes or equestrian sports, primarily from and to the U.K. and Ireland. There is also very limited trade recorded for sheep, in addition to species, such as parrots, for the exotic pet trade. While the live animal trade between E.U. Member States and Australia is limited, both are responsible for live animal exports beyond their borders, and the free trade agreement could increase such trade.

The Humane Society International briefing also includes provisions relating to trade in fisheries and wildlife and associated products. The E.U. is one of the top three destinations for illegal wildlife (alongside China and the U.S.). The European Union accounts for one third of all ivory seizures worldwide with Belgium, France, Portugal and the U.K. acting as key transit routes. Caviar, vicuna wool and reptiles are other frequently traded items. As trade between the E.U. and Australia is liberalized, there will also potentially be an increased opportunity for illegal trade in live animals and wildlife products, warns Humane Society International.