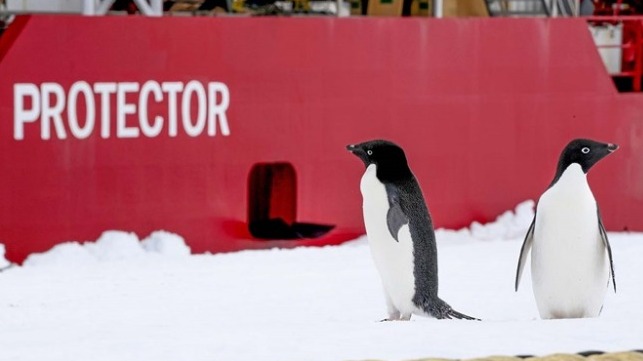 Working together with British Antarctic Survey’s vessel RRS Ernest Shackleton, the ice-strengthened vessel crunched her way to a remote Antarctic ice shelf to support a team of around 100 scientists who seek to understand a glacier the size of Great Britain.

The gigantic Thwaites Glacier is melting – accounting for four per cent of the annual sea level rise every year. Scientists fear the huge mass of ice could eventually collapse, raising the global sea level 80 centimetres – more than two and a half feet – and so are beginning a five-year programme of field activities on the glacier.

With the nearest British and American scientific research stations more than 850 nm away from the research site, the two ships were called upon to deliver essential heavy stores to the ice edge in preparation for the arrival of the scientists next year.

Upon arriving at the Stange Ice Shelf, a team went on to the ice to dig deep holes to secure the ship’s berthing lines. The crew then worked around the clock for 72 hours with their colleagues from the British Antarctic Survey to offload around 300 tonnes of equipment, machinery and supplies as quickly as possible.

“It was hard work yet extremely rewarding; having the opportunity to play a small part in such a huge project is something that I will certainly look back on with pride later in my life,” said Leading Engineering Technician Colin ‘Chappers’ Chapman, part of the team involved in the unloading. 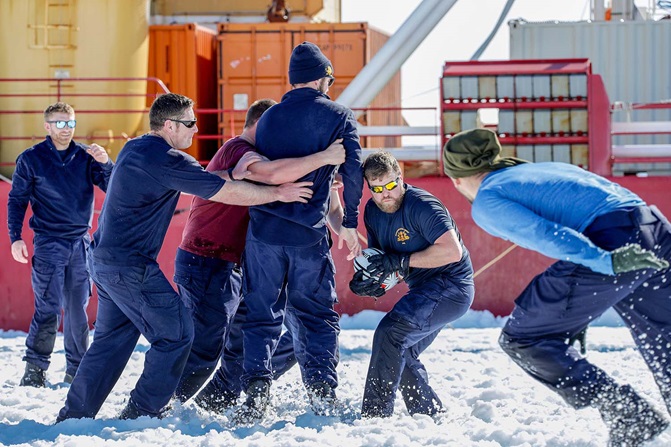 The sailors and Royal Marines took a short break from the lifting and shifting to play rugby, a match organised by HMS Protector’s physical training instructor, David Clayton-Charlesworth.

“Without the assistance of HMS Protector, we just couldn’t have delivered all the necessary cargo to this remote part of West Antarctica in time to begin this vital research programme, which will help us predict future global sea-level rise," said BAS Director of Science Professor David Vaughan. “This partnership with the Royal Navy has been enormously valuable and the kit they have delivered will mean that our joint UK/US science teams can begin their fieldwork on schedule next year.”

HMS Protector has been away from its home port since September 2015, and she will not return home until May next year. She spends the summer in the Southern Hemisphere conducting research on the fringes of the frozen continent and austral winters in milder waters off West and East Africa.