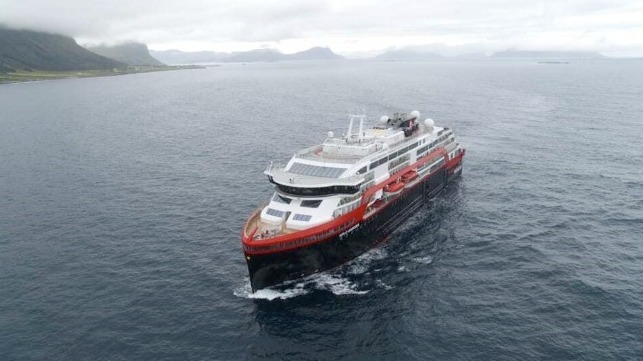 The Roald Amundsen under way on battery power (Hurtigruten)

Hurtigruten’s diesel hybrid powered cruise ship Roald Amundsen is the first vessel of her kind, and this week she became the first cruise ship in the world to sail (for a period) on battery electric power alone.

"This opens a new chapter in maritime history. MS Roald Amundsen is the first cruise ship equipped with batteries, something deemed impossible just a few years back," said Hurtigruten CEO Daniel Skjeldam. Over the course of a voyage, Amundsen's hybrid propulsion will reduce CO2 emissions by more than 20 percent compared to other ships of the same size.

Hurtigruten took delivery of the Amundsen from Norway-based Kleven yard last week. The ship was due to begin operations in July 2018, but Kleven asked for more time to complete the ship due to the "complexity of the project." Her rescheduled maiden voyage was set for May 2019, but additional delays pushed it back further to July 2.

Her sister ship, the Fridtjof Nansen, was also delayed in construction and will not debut until next year. Hurtigruten has exercised an option with Kleven for an as-yet-unnamed third ship in the series, and it has an additional option available for a fourth.

"We are extremely proud of the [Amundsen], which is the result of a tremendous team effort of the Kleven employees and our sub-contractors," said Kleven project manager Asbjørn Vattøy.

Capt. Kai Albrigtsen, who started his Hurtigruten career as a galley assistant four decades ago, is at the Amundsen's helm for her first voyage. The ship's maiden season includes a traverse of the Northwest Passage, which will make her the first hybrid-powered ship to attempt the voyage. She will proceed southwards with expedition cruises along the west coast of North- and South America, then head to Antarctica for the 2019/2020 season.