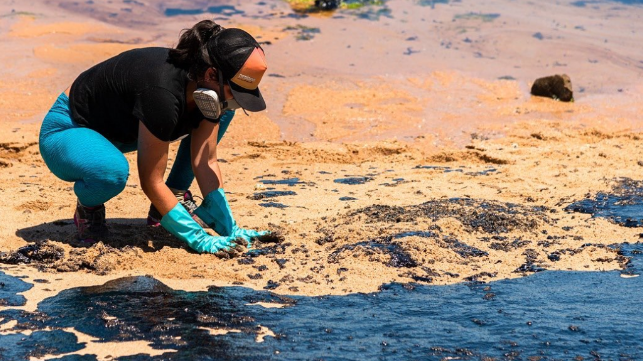 Nearly two months after a black sludge was first reported on the shore in Pernambuco, the Brazilian government still hasn't determined the source of the oil spill that is polluting beaches along more than 1,000 miles of the country's northeast coast, and Brazilian President Jair Bolsonaro is beginning to draw fire for what some view as an ineffective response to the disaster.

Testing by government and university labs indicates that the oil is not from Brazilian production, raising the probability that it originated outside of Brazilian waters. Bolsonaro has variously blamed Venezuela - which is having serious difficulty maintaining its oil processing infrastructure - or a "criminal act" intended to skew the public's opinion in advance of a giant offshore oil exploration auction, which is scheduled for next week. The Brazilian navy has put forward a separate theory that the oil originated from a ship on the high seas, and it says that it has identified 30 tankers which could potentially be linked to the spill.

Whatever its origins, the spill response effort has an unusual challenge: most oil releases sit at the surface, leaving a characteristic oily sheen. This spill floats below the surface, rendering it invisible, unmappable and immune to normal containment barriers. Brazilian authorities have little ability to estimate even how much of the oil may still be in the ocean and waiting to come ashore.

Local citizens and volunteer groups have been handling most of the cleanup duty since the spill began, leading some citizens and local leaders to question where the government's resources are when they are needed most. About 1,500 military personnel have been assisting with cleanup, and last week, Bolsonaro dispatched 5,000 more servicemembers to help the oil removal effort.

Northeastern Brazil relies in part upon tourism for revenue, and the spill arrived right in high season, Sen. Humberto Costa of Pernambuco told Brazilian media, relaying his constitents' frustration. “We are facing an incompetent government that has done nothing for weeks," Costa said.

The region's estimated 130,000 fishermen will also be affected, according to Costa. The full effects of oil contamination on local fisheries and the health implications of consuming any tainted seafood are not yet known, but initial testing suggests widespread damage to marine life in coastal waters. In addition, the coastline is a hotspot for oliver ridley and loggerhead sea turtle nesting, and hundreds of thousands of baby turtles head from the sand to the surf every year. The contamination poses a threat to their survival, according to Brazilian conservation group Projecto Tamar.