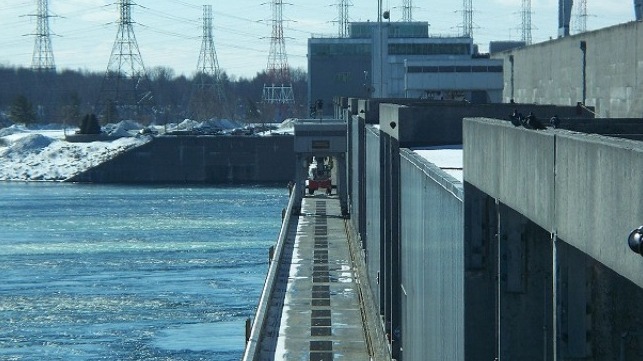 Closing the St. Lawrence Seaway in December to accommodate higher water outflow at the Moses-Saunders dam in December would cost the Canadian and U.S. economies $193 million/per week, says the bi-nation Chamber of Marine Commerce.

The measure, designed to ease flooding in the region, would impact farmers’ grain exports, manufacturing plant operations and disrupting deliveries of fuel, construction materials and road salt for winter safety to cites throughout the region.    Increasing outflows above the safe navigation limit to the highest levels possible would lower Lake Ontario levels less than four centimeters a week. In a closure situation, it would take more than two weeks to clear ship traffic and removal of buoys duties before outflows begin. Ice conditions could also prohibit maximum levels. This negligible reduction would come at a huge cost to commercial navigation, says the Chamber. The figure $193 million per week figure is based on Business Revenue Impacts of cargo transiting the St. Lawrence Seaway (Martin Associates study, 2018). This figure excludes cargo carried by Canadian-flag ships through the Welland Canal (which theoretically would not be impacted by water levels at the Moses-Saunders dam).  Even if companies were able to find alternative transportation (with this very short notice), this would cost considerably more and force huge volumes of cargo onto thousands of trucks at the detriment to the environment and road congestion.

The fall is the busiest grain export season right up to the end of December, and by March the elevator systems are normally full and pushing for Seaway vessels as soon as the system opens.

U.S. and Canadian communities move road salt in great volumes at the end of the season and again at opening, as their inventories often struggle to make it through an entire winter. During five months, Canadian ship operators experienced lost shipping days, lost cargo tonnage and operating costs amounting in the millions of dollars due to the 26 mitigation measures put in place to continue navigation during the record outflow levels from the Moses-Saunders dam. It is estimated that transit delays have resulted in a loss of $1.5 million per day in business revenues to the wider Canadian and American economies.     “We have the greatest sympathy for Lake Ontario and St. Lawrence River residents and business owners that have been impacted by flooding due to unprecedented weather conditions. This situation has also cost our supply chain millions of dollars,” says Chamber of Marine Commerce President Bruce Burrows. “Halting St. Lawrence Seaway shipping altogether would cause major harm to our economy and achieve no noticeable benefit for flooding victims. We call on the IJC and government leaders to collaborate with affected stakeholders to find solutions that look at shoreline resiliency, flood management zones and what can be done during the winter when the St. Lawrence Seaway is closed to navigation.”

Deborah DeLuca, Executive Director, Duluth-Seaway Port Authority, says: “As residents ourselves of Great Lakes communities affected by flooding and storm damage, we share in the concern regarding record high water levels. However, the minor water level relief that would result from increased December outflow through the Moses-Saunders Dam would be negligible at best. Concurrently, increasing the outflow to levels unsafe for navigation would do immeasurable and long-term harm to producers and consumers throughout the entire Great Lakes region and the United States as a whole. We’re all eager for solutions, but opening the flow on a single dam in December isn’t a meaningful solution, especially when weighed against the associated adverse effects.”