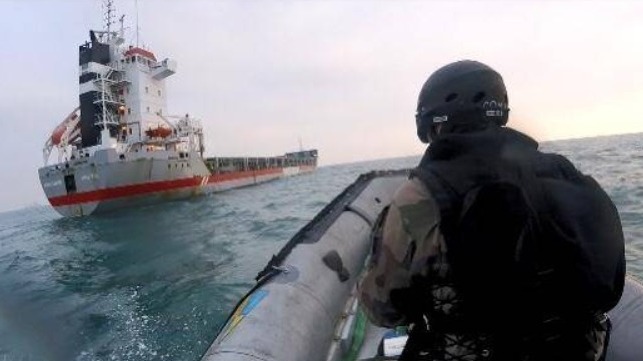 Launch from the Cormoran approaches the Moezelborg (courtesy Marine Nationale)

On Wednesday morning, the Regional Operational Center for Surveillance and Rescue (CROSS) Gris-Nez detected allegedly "erratic" movements from the bulk carrier Moezelborg southwest of Boulogne. According to the center, the bulker was approaching "dangerously close" to a sandbank in the Strait of Dover traffic separation scheme.

After diverting nearby vessel traffic to reduce the risk of collision with other ships, CROSS Gris-Nez contacted the Moezelborg to check her capacity to resume a safe route.

The maritime operations center of the maritime prefecture of Cherbourg, in liaison with CROSS, decided as a precaution to order the French Navy patrol vessel Cormoran to escort the Moezelborg. In addition, the Cormoran was tasked with sending a visiting team to board the bulker for an inspection.

At 1020 hours, the visiting team was on board, and they determined that the crew and captain were able to ensure the safe navigation of their vessel. At 1115, the Moezelborg resumed her voyage to Finland.

"A violation report will still be drawn up by the CROSS following this dangerous maneuver in the [VTS] area," the center said in a statement.

The Strait of Dover is one of the world's busiest shipping lanes, and about 25 percent of international maritime traffic passes through it every year.  The VTS scheme for the area (CALDOVREP) is managed jointly by the UK and France, with British authorities handling the southwest-bound lane and CROSS Gris-Nez handling the northeast-bound lane.

We have 27 guests online