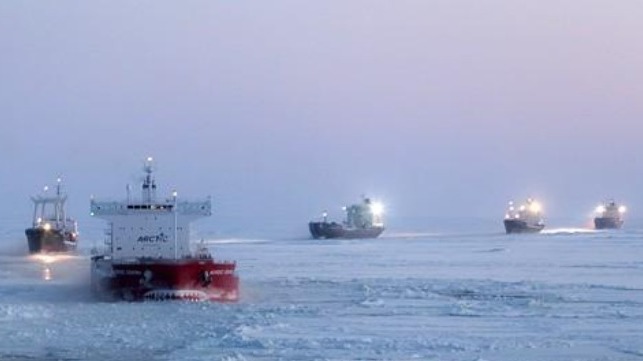 Cargo shipments passing through the Northern Sea Route, Russia’s remote Arctic sea artery, topped 30 million tons during the past year, officials have said, marking a major uptick in fossil fuel deliveries from one of the world’s most vulnerable environments.

The shipping upswing, which President Vladimir Putin has made a centerpiece of his economic strategy, comes amid warnings from the president’s own ministries that heavy industrialization in the Arctic could make the effects of climate change worse for Russia – which scientists say is already warming 2.5 as fast as fast as any other country in the world.

Yet the shipping surge also goes toward fulfilling one of Putin’s biggest demands: An order, issued in 2017, that cargo volumes flowing through the Arctic reach at least 80 million tons a year by 2024.

For now, those who favor an Arctic build out are winning out. On Thursday, Putin signed a massive Arctic master plan that cements national priorities for development in the polar region. Chief among them is a mandate to drill for more fossil fuels in the polar region by offering oil and gas developers enormous tax breaks, the Barents Observer reported.

That master plan builds on yet another plan issued in January, which essentially divides the responsibility of developing the Northern Sea Route among Rosneft and Gazprom Russia’s state oil and gas monopolies; its state nuclear corporation Rosatom, and Novatek, the private natural gas giant developing on the Yamal Peninsula.

The new shipping figures reflect this emphasis on fossil fuel production. According to the Northern Sea Route Administration, 31.5 million tons of goods were shipped via the passage in 2019.

The vast majority of that tonnage – fully 20.5 million tons – was comprised of natural gas from Novatek’s Yamal LNG project, said the Russian news agency Korabel. Next came 7.7 million tons of oil from Gazprom Neft’s Novy Port development in the Gulf of Ob. Another 1.5 million tons was accounted for by ores and minerals shipped from Norilsk Nickel’s port on the Yenisei River.

Relatively little of the tonnage was made up by goods being shipped along the entire 6,000-kilometer stretch of the route, meaning the Northern Sea Route still isn’t competitive with the Suez Canal. Only 37 ships made the entire Europe to Asia voyage during the course of last year. That’s fewer than the number of ships passing through the Suez Canal in the course of a single day.

Still, in terms of percentages, cargo volumes on the Northern Sea Route in 2019 increased by 56.7 percent over the previous year.

But the surge is at odds with the climate advice offered by any number of Russian government bureaucracies ministries. In particular, the Audit Chamber, which oversees government spending, has warned that the Kremlin’s economic plans are serving to make the effects of climate change even worse.

In a report released in January, the Audit Chamber took aim at Putin’s $400 billion National Projects plan – of which Arctic development is a part – and criticized it for making no mention of climate change and its failure to fund any efforts mitigating its impact on the country’s economy. Should the Kremlin fail to defend Russia from these impacts, the report said, climate change could knock up to three percent per year off Russia’s GDP by 2030.

That’s only the latest alarm bell from within the government. A government position on climate change, also published in January, directed Russian agencies to prepare for climate calamities like droughts, floods and fires and to draw up plans for crisis resettlement.

In September, Russia’s natural resources and environmental ministry warned that the country was warming two and a half times faster than other nations of the world. Melting permafrost, which accounts for some 65 percent of Russia’s landmass, could threaten hundreds of billions of dollars worth of infrastructure the ministry said.

Ice levels in the Arctic are decreasing at an alarming pace – a decline that will only be accelerated by more maritime traffic. According to NASA data, ice cover around the North Pole has been retreating by more than 12 percent each year since 1979. Because of this the Arctic is absorbing more solar radiation, causing polar temperatures to rise twice as fast as anywhere else on earth. Source: Bellona