New regulations and evolving technologies to meet them are giving shipowners a headache. 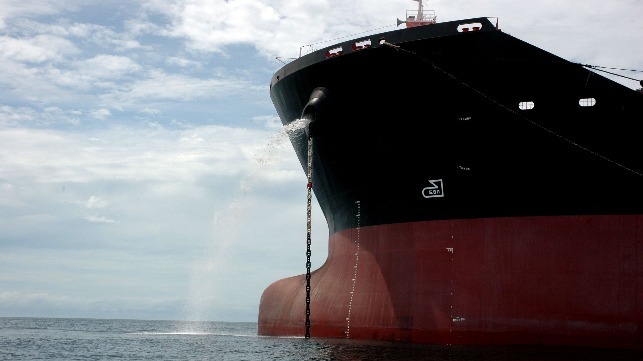 Wastewater is ubiquitous on land and sea, and ships create multiple streams of effluent as they voyage from one port to the next. Their ballast systems discharge marine life. Their passengers and crew create sewage, and oil mixes with water in their engine room bilges.

Vessel operators must handle these waste streams carefully to preserve the marine environment, avoid penalties and maintain the bottom line. Discharge regulations and treatment technologies are constantly changing, and shipowners must make smart investments to stay in compliance.

Invasive species like the zebra mussel can inflict environmental and economic harm, and these organisms often travel in ballast tanks. The IMO's ballast water management convention, formally known as the “International Convention for the Control and Management of Ships' Ballast Water and Sediments,” is intended to reduce their spread by requiring ships to disinfect the discharged water to a specific standard.

For shipowners in international trade, each newbuild laid down after September 2017 must have an approved ballast water treatment system, and existing ships will have to retrofit one between 2019 and 2024 or head for the scrapyard.

Insiders say that treatment system suppliers will undergo a consolidation process over the coming decade. As retrofit regulations take effect, an estimated 40,000 ships will seek upgrades over a five-year period. However, after that period ends, newbuilds will be the only source of sales and likely not enough to sustain all 60 vendors on the market today.

There are near-term challenges as well. Last July, after a petition from the International Chamber of Shipping (ICS) and a group of flag states, the IMO deferred the implementation of ballast water treatment requirements for existing ships until 2019, two years later than originally planned. Since strengthened IMO type-approval standards will take effect later this year, ICS Secretary General Peter Hinchliffe argued that shipowners should be allowed to wait two more years in order to "invest in far more robust technology.”

The effect on near-term sales is significant. One manufacturer of a type-approved ballast water treatment system went bankrupt in September, citing a decline in orders and waning customer interest due to IMO's delay. The firm has since been purchased and will continue to support installed systems, but its challenges were an unsettling signal to shipowners, who depend upon the original equipment manufacturer for service and repairs.

Vessels calling at American ports will not be able to wait for the IMO deadline as the U.S. has its own regulations and implementation schedule. These are already in force, and the U.S. Coast Guard has begun issuing penalties for untreated discharges.

Last February the Coast Guard initiated a civil proceeding against the bulker Vega Mars for an untreated discharge at Tacoma, Washington, and in August marine inspectors in Portland, Oregon issued a $5,000 fine for the bulker ANSAC Moon Bear on similar charges. The maximum penalty is $38,000.

So far the Coast Guard has only announced enforcement actions for the discharge of untreated water, but its inspectors will eventually begin testing ships' treatment systems as well. Mark Riggio, Senior Market Manager for system manufacturer Hyde Marine, cautions that the IMO and Coast Guard type-approval tests may not actually predict the results of field tests.

The unsettled situation is reminiscent of the early days of the oily water separator industry, says Ernie Chang, Sales Director for C&C Panasia. He predicts that service and support will determine success for manufacturers as the market shakes out, just as it did then.

"In five to ten years,” Chang explains, “we'll have achieved what was expected ten years ago: Systems all on board, all operating, all type-approved. After that, it's not so much about the equipment. It'll be more about who is able to maintain their systems." And smaller, less diversified players – like the firm that filed for bankruptcy last year – might not be able to support their products over the long run.

Oily bilge water ranks among the most problematic waste streams for merchant vessel operators. Its existence is inevitable on most vessels, and discharging it to a reception facility on shore is expensive, if even possible, on a ship's trading route.

To discharge bilge water at sea, the crew must run it through an oily water separator (OWS), a piece of equipment that requires careful maintenance and attention. An oil content monitor (OCM) keeps an eye on the output to make sure it is under the maximum legal limit. The amount, date and position of the discharge must be manually logged in the ship's oil record book.

If the OWS fails while at sea, less scrupulous crewmembers and vessel operators may believe they have an incentive to discharge the water illegally, without pretreatment. If they quietly pump the waste over the side using a homemade "magic pipe" bypass, then falsify the log, they can avoid disrupting operations and incurring additional disposal costs.

However, this may not always go as planned. Untreated discharges and falsified oil record book entries are prosecuted with enthusiasm in some jurisdictions, notably the U.S. Improper releases are hard to hide from port state control authorities. A faked logbook, an unauthorized bypass setup or the presence of oily water in the overboard piping can lead to million-dollar fines for the operator and criminal convictions for the crew.

A small investment in digital oversight can save a lot of money, says Mike Coomber, Managing Director of electronic monitoring firm Rivertrace. Given the serious liability attached to illegal discharges – and even to inadvertent lapses in recordkeeping – many shipowners are looking into automated methods of recording the oily water treatment process. Rivertrace offers one solution.

The company's Smartsafe ORB system monitors the status of the OWS, the discharge valve, the OCM and any flow in the overboard line and creates a digital record of activity. If the discharge setup is run in a manner that could result in a MARPOL violation – for example, if there is flow in the overboard line but the OWS is turned off – Smartsafe records it as an illegal event.

As for the crew, says Coomber, they don't mind having the extra monitoring: "Generally, they like it, as it’s a safeguard for them if they forget the details to be recorded in the oil record book. They can simply recall any discharge from any date, print off the data and use this for manual entry." This can help avoid any confusion over the contents of the record book, which is a frequent target of inspection.

Commercial vessels also need to treat the wastewater generated by their crews and, in the case of cruise ships and ferries, by their passengers. The requirements vary by jurisdiction and vessel type and are quite stringent in some locales, notably Alaska.

Untreated black water discharge is generally permitted in international waters except for the Baltic Sea, which is covered by new IMO regulations as a "special area.” Due to concerns over nutrient concentrations and their effect on the environment, passenger ships operating in the Baltic will either have to install a special kind of treatment system or begin discharging their black water to shoreside sewage reception facilities.

The regulations limit the discharge of nitrogen and phosphorous, and the specialized shipboard equipment required to meet these standards has a large footprint. For newbuilds and smaller ships, owners can find practical “special area” treatment solutions on the market.

However, it will be a huge hurdle to retrofit ships with more than 1,000 passengers, warns Mark Beavis, Managing Director of wastewater treatment manufacturer ACO Marine. Without a workable onboard treatment solution for these bigger vessels, "the port handling facilities in the Baltic will have to be upgraded to accommodate more shore discharges," he says.

For vessels operating in territorial seas where untreated black water discharges are prohibited, a treatment system may also be a necessity. Biological treatment can reduce the volume of wastewater by 95 percent, a significant advantage for vessels with space constraints. ACO Marine's biological treatment systems are primarily targeted at the superyacht, cruise ship and naval markets, but small workboats can also benefit from this treatment method using equipment from other vendors.

For example, Scienco/FAST makes a sanitation device under its MarineFAST® brand that uses a compact tank to hold, aerate and mix the waste over a proprietary media film, where bacteria digest the suspended solids. The resulting liquid effluent is passed through a chemical process for disinfection, then pumped over the side or repurposed for non-potable uses like deck washing. The smallest SciencoFAST units can be fitted onboard a harbor tug, and much larger designs are available for offshore installations and cruise ships.

Elephant in the Room

Beavis expects that more wastewater regulation is coming, but not necessarily for black water: "The wastewater ‘elephant in the room’ is grey water, often a worse pollutant than black water. Many ships now treat both black and grey water, but this is not yet legislated. The next regulatory change for wastewater discharge will be for the treatment of grey water to the same standard." – MarEx

Paul Benecki is the magazine’s News Editor for the Americas and Europe.