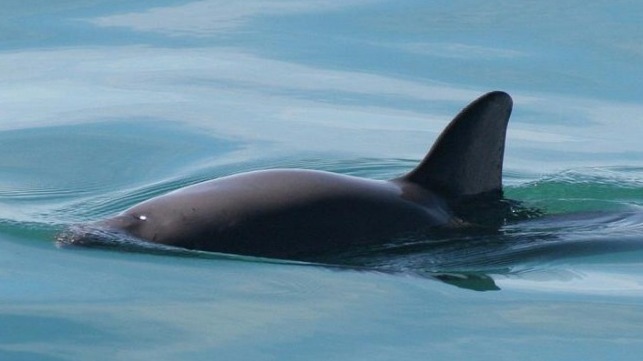 Responding to a lawsuit filed by conservation groups, the U.S. Court of International Trade has ordered the U.S. Government to ban seafood imports from Mexico caught with gillnets that kill the critically endangered vaquita porpoise.

As few as 15 vaquita remain, and almost half the population drowns in fishing gillnets each year. Without immediate additional protection, the porpoise could be extinct by 2021.

This is the life line the vaquita desperately needs, said Giulia Good Stefani, staff attorney with the Natural Resources Defense Council, who argued the case before the Court.

The ruling follows a lawsuit filed in March by the Natural Resources Defense Council, the Animal Welfare Institute and the Center for Biological Diversity, and it affirms Congress’ mandate under the U.S. Marine Mammal Protection Act that the United States protect not just domestic marine mammals, but also foreign whales, dolphins, and porpoises.

The Act requires the U.S. government to ban seafood imports from foreign fisheries that kill marine mammals, including the vaquita, at a rate that would violate U.S. standards for domestic fishers. The vaquita’s mortality rate of almost half the population each year far exceeds the fisheries’ bycatch rates for marine mammals permitted in this country.

The import ban covers all fish and fish products from Mexican commercial fisheries that use gillnets within the vaquita’s range in the Upper Gulf of California. This includes shrimp, corvina (drum fish), sierra (Spanish mackerel) and chano (bigeye croaker) from the area.

It is estimated that in 2017 more than 1,400 tons of the now-banned gillnet-caught fish and shrimp, valued at roughly $16 million, crossed the border to be consumed in the U.S.

“With vaquitas on the brink of extinction, these economic sanctions are painful but necessary to push Mexican officials to finally protect these little porpoises,” said Sarah Uhlemann, international program director at the Center for Biological Diversity.

In its decision, the court found that “the number of permissible vaquita deaths under the [Marine Mammal Protection Act] is being exceeded, that an embargo is legally required, and that the species is at risk of extinction.” The court explained that the risk of the vaquita’s extinction from continued gillnet fishing in the Gulf outweighed the costs of an embargo. The court cited experts’ statements that “extinction is . . . inevitable unless gillnets are completely removed from vaquita habitat,” and that the vaquita’s plight is so desperate that “even one more bycatch death . . . threatens the very existence of the species.”