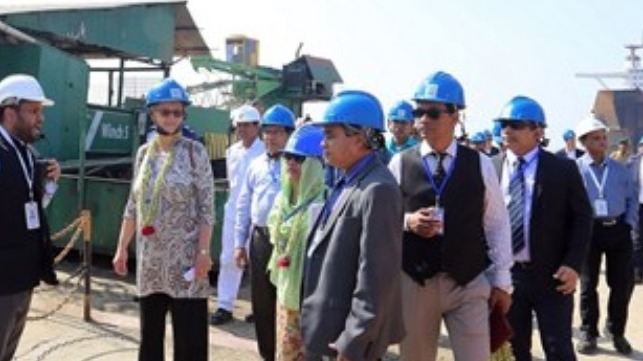 The second phase of an IMO-implemented project to enhance safe and environmentally sound ship recycling in Bangladesh was launched at a meeting of stakeholders in Dhaka, Bangladesh, late last month.

The 19-month project is being funded under a $1.1 million agreement with the Government of Norway. It focuses on building capacity within Bangladesh to work towards accession to the Hong Kong International Convention for the Safe and Environmentally Sound Recycling of Ships. The Hong Kong Convention, adopted in 2009 but not yet entered into force, includes regulations for shipowners, recycling facilities, flag states and recycling states to ensure that end-of-life ships do not pose any unnecessary risks to human health, safety and the environment when being recycled.  The project will build on the first phase of the Safe and Environmentally Sound Ship Recycling in Bangladesh (SENSREC) Project, which resulted in economic and environmental studies on ship recycling in Bangladesh, the development of training material, capacity building plans and a preliminary design for infrastructure including facilities for treatment, storage and disposing of hazardous wastes generated from recycling operations.

Bangladesh is one the world’s top five ship recycling countries by capacity, alongside China, India, Pakistan and Turkey. Together these nations account for 98 percent of the market.

Some yards in Bangladesh have already had success in improving their safety and environmental performance. Earlier this year, PHP Shipbreaking and Recycling Industries of Bangladesh bought its first vessel to be recycled in accordance with the Hong Kong Convention. PHP was the first Bangladeshi recycling facility to receive statement of compliance with the convention in October 2017.

Speaking at the Dhaka meeting, Sidsel Bleken, Ambassador of Norway to Bangladesh, highlighted the significant progress made and the nation's support for phase II of the SENSREC project. “The first phase of the project has achieved significant progresses in terms of developing health, safety and environmental standards as well as developing appropriate training programs for the industry stakeholders including its workers.  Norway is pleased to launch phase II of the project and to continue supporting Bangladesh on its road to compliance with the Hong Kong Convention. The Government of Bangladesh, the ship recycling industry as well as the international shipowners, have a joint responsibility in making this happen.”

Other international partners involved in the project include the Secretariat of the BRS Conventions, the International Labour Organization and the United Nations Industrial Development Organization.

In May, shipowners associations BIMCO, ECSA, ICS and INTERTANKO issued a joint appeal for the ratification of the Hong Kong Convention. The convention requires the approval of 15 states and 40 percent of world merchant shipping to enter into force. So far, six states have ratified the convention.