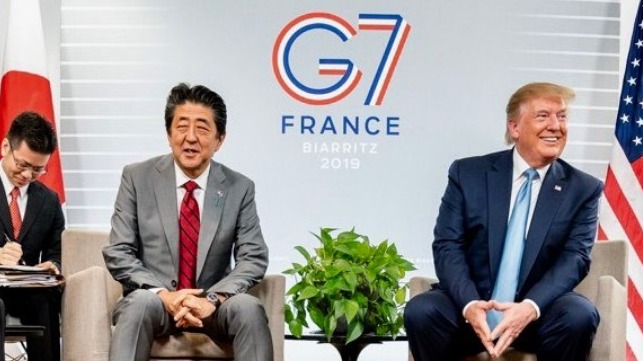 President Donald Trump and Japan’s Prime Minister Shinzo Abe agreed on the principles of a trade deal on Sunday at the G7 meeting in France.

“We’ve been working on a deal with Japan for a long time,” said Trump. “It involves agricultural and it involves e-commerce and many other things.” The deal is expected to open up markets to over $7 billion worth of goods including excess U.S. corn.

Corn has been an issue for Trump who, urging Abe to talk specifically about it, said: “And we’ve been working with the farmers and making very, very large payments for the unfair way they were treated by China.

“And the farmers are very happy.  They like — they like their President.  They’re very happy.  But I think it’s even better, and I think they’re even happier, when they hear you’re actually buying their products.”

“And we believe that there is a need for us to implement emergency support measures for the Japanese private sector to have the early purchase of the American corn. Of course, there is something that is already a shared understanding between — by the Japanese public, Japanese private sector, as well. So that’s why, against such backdrop, I do think that there is a possibility for us to cooperate to address this issue.”

The deal comes as Trump says he says he wishes he had raised tariffs on Chinese goods even higher. Speaking on the sidelines of G7, he responded in the affirmative to questions from reporters on whether he had any second thoughts about raising tariffs on Chinese goods by five percent last week, reports Reuters. “President Trump responded in the affirmative - because he regrets not raising the tariffs higher,” White House spokeswoman Stephanie Grisham said in a statement afterward that sought to clarify the president’s remarks.