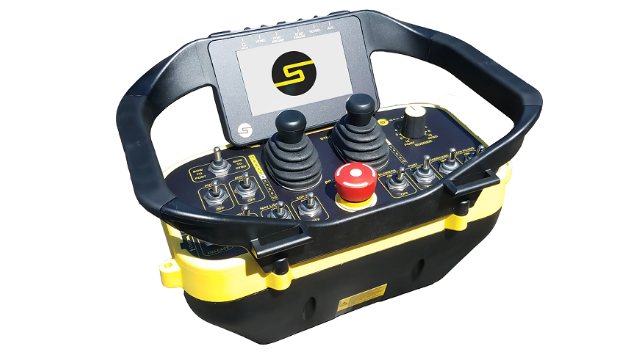 ATB tug masters now have the option to maneuver their vessel from any place on board - so long as it is equipped with the world's first Coast Guard-approved wireless helm system for ATBs. Boston-based company Sea Machines Robotics announced Tuesday that it has received approval from the U.S. Coast Guard and from ABS for installation of its wireless helm system aboard ATB tugs.

Sea Machines' SM200 system provides the operator with a portable, wireless helm and propulsion control console, as well as remote control of auxiliaries and payload equipment. This allows the helmsman to work from the location that offers the best visibility and safety. So far, it is only USCG-approved for ATB use, but Sea Machines hopes to win more approvals soon.

According to Sea Machines, one significant advantage of a wireless helm control on board an ATB is for connecting the tug in the barge notch. The SM200 gives the helmsman full control of the tugboat and connecting pins with a direct, local view of the task. In addition to the helm controls and pin controls, the beltpack also enables wireless remote control of vessel equipment like pumps and winches.

“Today Sea Machines celebrates the confirmation that our SM200 system has been approved for use aboard ATBs by two of the most trusted bodies in the industry, ABS and the U.S. Coast Guard,” said Michael G. Johnson, CEO, Sea Machines. “We also would like to thank Rio Controls & Hydraulics for their hard work in supporting the thorough review process and integrating the SM200 with their systems."

Sea Machines is also known for its SM300 remote/autonomous control system, which is designed to provide autonomous navigation functionality for commercial survey workboats, spill-response vessels and other applications. The company is also testing its own perception and situational awareness technology aboard one of A.P. Moller-Maersk’s container ships, and it has several other installations scheduled.