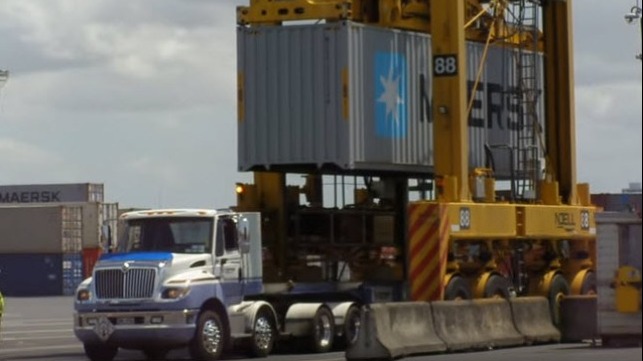 A new trial program being launched at the Port of Rotterdam and involved some of the world’s leading shipping companies is the latest example of the ports and the container shipping industry working together to realize the potential to use digital technology to improve the safety and efficiency of the shipping process. Using a blockchain application, shippers will authorize the release and movement of containers replacing the traditional PIN code system that requires manual processing and is more susceptible to errors and delays.

“By taking advantage of new technologies, we can make our port operations smarter, swifter, more efficient, and safer,” says Emile Hoogsteden, Director of Commerce of the Port of Rotterdam Authority. “The current pilot project is a good example. During this project, the different participants will be using a blockchain application that enables them to safely and efficiently organize the release procedure followed by the various parties in the chain.”

Every year, millions of containers are unloaded in the port of Rotterdam and forwarded to destinations. Collecting these containers is a complicated process used at most ports around the world, during which shipping companies, freight forwarders, transport firms, and terminals need to work closely together to ensure the swift and safe release of this freight.

The procedure involved to order the shipment of the container and to remove it from the terminal requires a range of manual actions from different parties. Any hitches or errors in the release process can result in wasted time, cause complaints and aggravation among clients and partners, and introduce the potential of fraud. Drivers need to have a valid pick-up right to remove a specific container from the terminal. This authorization is issued by a shipping company, which often hands it to the freight forwarder which orders a transport firm to retrieve the container at the terminal. Currently, the pick-up right is confirmed to the terminal using a PIN code.

The pilot project will be testing how best to improve the safety of the container release process throughout the chain, from the shipping company to the end-user. During the pilot project, the pick-up rights for the containers will be converted from a PIN code into a digital token that is moved along the process with the aid of a blockchain-based application.

The organizers of the project compare the technology being used to that of a banking or financial transaction where the data involved remains exceptionally secure. They say that the blockchain technology prevents the authorization from being stolen or copied along the way making the release faster and safer for everyone in the chain. The terminal operator can rest assured that the container has been released to the correct driver as there is only one valid token. The token is also confidential meaning that details about the chain and commercial relationships are not exposed during the process.