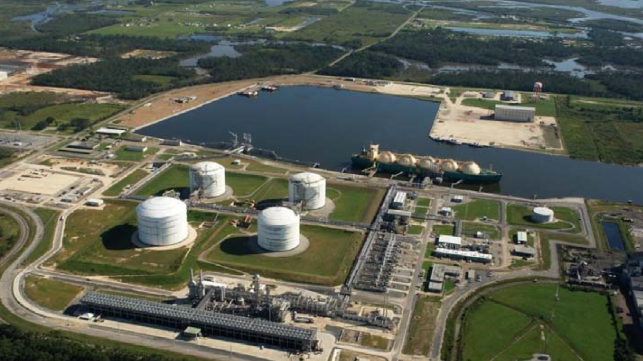 Energy Transfer’s existing Lake Charles regasification terminal. Shell announced Monday that it will not participate in its redevelopment as an export terminal (Energy Transfer)

Top U.S. LNG producer Cheniere Energy Inc. has issued an expression of interest in purchasing six shipments of liquefied natural gas for delivery to Europe in late 2020, a reversal for America’s most prolific exporter of the commodity.

While the reason for the potential purchase was not disclosed, LNG exports from the United States to overseas markets are not expected to be profitable this summer, according to Bloomberg, and spot cargoes could serve in lieu of Cheniere’s own production. Cheniere’s gas intake levels were down by about a fifth year-on-year for the month of March.

The European market is already awash in LNG diverted from Asia due to the demand cut caused by the COVID-19 epidemic in Asian markets, according to IHS Markit. This oversupply arrives just in time for a downturn in European gas demand: Italy, France and Spain now face their own outbreaks.

“The record in LNG deliveries to Europe is a domino effect from the demand impacts of the coronavirus pandemic,” said Michael Stoppard, IHS Markit’s chief strategist for global gas, speaking to Rigzone. “Asian buyers are reselling volumes purchased from the U.S. and portfolio sellers are offloading their excess cargoes as well. This already comes as European gas markets are already in extreme distress.”

Given the state of the LNG market, top LNG player Royal Dutch Shell has decided to pull out of its proposed Lake Charles LNG joint venture with U.S. midstream company Energy Transfer. Shell said that it will not move forward with taking an equity interest in the project, and Energy Transfer will be the sole developer moving forward. Like other early U.S. LNG export facilities, the Lake Charles site already has an import terminal, which would be converted and expanded with liquefaction trains for 16.5 million tonnes per annum of production capacity.

“This decision is consistent with the initiatives we announced last week to preserve cash and reinforce the resilience of our business,” said Maarten Wetselaar, director for integrated gas and new energies at Shell. “Whilst we continue to believe in the long-term viability and advantages of the project, the time is not right for Shell to invest. Through the transition, we will work closely with Energy Transfer.”

Energy Transfer confirmed the change in a statement Monday. “We continue to believe that Lake Charles is the most competitive and credible LNG project on the Gulf Coast,” said Tom Mason, the company’s president for LNG. “Having the ability to capitalize on our existing regasification infrastructure at Lake Charles provides a cost advantage over other proposed LNG projects on the Gulf Coast. The Lake Charles project also benefits from its unparalleled connectivity to Energy Transfer’s existing nationwide interstate and intrastate pipeline system that provides direct access to multiple natural gas basins in the U.S.”

Energy and shipping consultancy Drewry warned that the market disruption could mean delays or cancellations for a slew of proposed LNG projects. “Continuation of current conditions might even lead to the scrapping of some of these planned projects. Many of the planned projects targeted selling LNG at an average of $8 per MMBtu; however, current market conditions and a further collapse in oil prices do not justify the price tag any longer,” Drewry wrote in a client advisory.