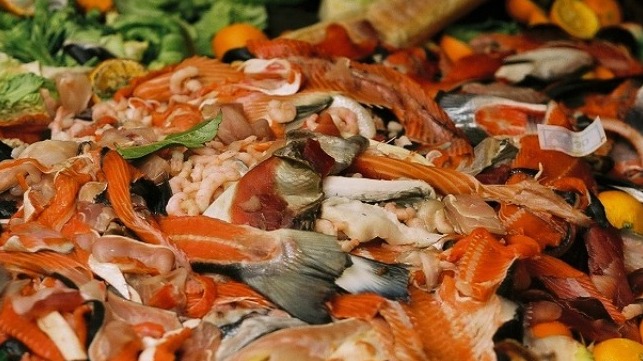 Waste disposal on some vessels contravenes both maritime and national biosecurity legislation by allowing food waste into gray water systems. From there, food waste that is meant to be separated and carefully disposed of disappears when ships discharge sewage and gray water.

The result is that the local community and environment are exposed to potential biohazards, ship owners to legal prosecution and maritime authorities to charges of weak compliance and enforcement.

The fact that non-compliant waste disposal systems are being approved by maritime authorities and their recognized organizations (including class societies) should cause grave concern. A legal system would be deemed a failure if a prisoner could simply run away. In this case, the prisoner can even stop and say hello as he walks past the guard.

The COVID-19 pandemic highlights that biosecurity has never been more important. Although the coronavirus is not passed through food waste, one does not have to look back too far to find examples of diseases that can be transmitted through food. Last year, for example, an outbreak of African swine flu put pig populations in Asian countries at risk [1].

Food waste can spread plant pests, as well as livestock and poultry diseases such as swine fever, rabies, foot and mouth disease or avian flu [2]. Some countries have strict biosecurity regulations falling under the jurisdiction of the national agricultural authorities, while others have ad-hoc measures [3].

In Europe, food waste that is “international catering waste” is classed as Category 1 material, carrying the highest level of risk. It must be stored and transported in covered and leak-proof containers to approved incineration facilities or landfills for deep burial [4].

In U.S. territorial waters, food waste on or removed from a ship is “regulated garbage” if the ship has been in any port outside the U.S. and Canada in the last two years. It must be stored in tight, leak-proof covered containers and taken to approved facilities for incineration, sterilization or disposal in an approved sewage system [5].

In Canada, food waste (or “ship’s refuse”) from outside Canada and the U.S. is to be stored in closed leak-proof containers and removed at the first port of entry to approved facilities for incineration or sterilization or to landfills for deep burial [6].

Australia considers international food waste a biosecurity risk and has requirements for the collection, storage and transport of this waste for acceptable disposal methods [7, 8]. In New Zealand, food waste is categorized as “risk goods.” While within New Zealand territorial waters, risk goods (other than for biosecurity clearance at a place of first arrival) shall be secured onboard the vessel. This includes being kept in a leak-proof, vermin-, insect- and bird-proof container or room [9,10].

In brief, these rules demand that food waste be either discharged to the sea beyond three nautical miles or 12 nautical miles from the nearest land, or transferred to the approved facilities for disposal. In the meantime, it must be managed in a way that is leak-proof.

Annex V of IMO’s MARPOL Convention permits three routes for a ship’s food waste: to the sea (beyond three or 12 nautical miles from the nearest land); to an onboard incinerator; and to port reception facilities. The actual disposal route must be recorded in a Garbage Record Book.

However, the convention itself never makes any reference to biosecurity. Some requirements related to biosecurity risks exist only in Guideline MEPC.295(71), which states in section 2.9.2 that food waste should be directed into an appropriately constructed holding tank when discharge is prohibited. It also states that food waste carrying a risk of diseases or pests should be kept separately and stored in clearly marked and tightly covered containers, and preferably retained for discharge at port reception facilities in accordance with the laws of the receiving country.

Importantly, the IMO’s Survey Guideline, Resolution A.1120(30), has no survey requirements to food waste related scopes under MARPOL Annex V – let alone those related to the biosecurity rules of national agricultural authorities. Even where national inspection regimes on biosecurity rules are in place, they have not been effective enough in spotting or stopping non-compliance.

On many ships, food waste and its derivatives are sent, in whole or in part, to the gray water system, where it vanishes without a trace. Such practices have been documented in various reports, sometimes commissioned by the maritime authorities [11]. The technical standards of some classification societies permit food waste to be sent to sewage treatment plant instead of a food waste food holding tank as stipulated in section 2.9.2 of MEPC.259(71). Such standards create further non-conformity because sewage treatment plant is not one of the three permitted routes in the Garbage Record Book, which is completed and signed by the ship Master.

The diagram below illustrates the extent of potential non-compliances, looking at a food waste disposer as one of many potential examples. Food waste entering the system from the top left corner of the diagram never comes out from the system; it simply vanishes. Tracing the lines to the port reception facilities (PRF), it is clear how food waste gets ashore in disguise, escaping the “approved facilities” intended by the local biosecurity rules. From there it can end up on the agricultural land, carrying biosecurity risks with it. 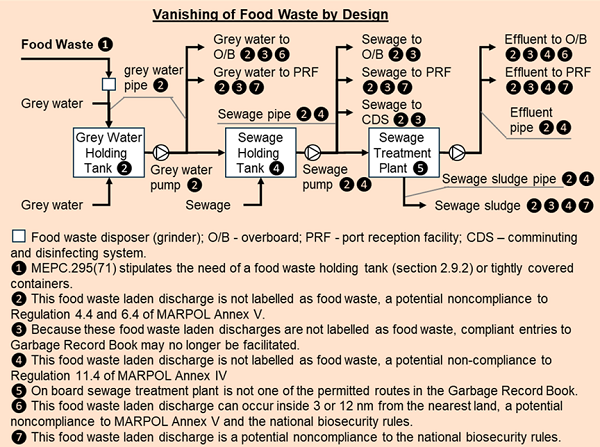 Let us hope that maritime and agricultural authorities interpret and enforce their biosecurity rules consistently. Until then, it will be business as usual for improper practices to spread on ships – both by design and by approval.