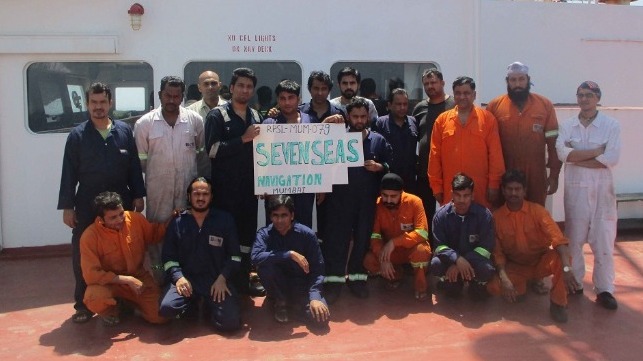 The crew of the Gulf Sky (HRAS)

The NGO Human Rights at Sea reported Tuesday that the tanker Gulf Sky – which was under arrest in the UAE – has departed Port Khor Fakkan Anchorage in violation of a no-sail order and disappeared. HRAS and the Gulf Sky’s flag state are looking to find the vessel and her 22 Indian crewmembers, who have been stuck on board since late last year.

“Our first priority is to ensure that the crew are safe, are not under any form of duress either internal or external to the vessel, and that their location is identified as soon as possible. We are working closely with the Dominica flag and the UAE Federal Transport Authority to seek clarity of the facts,” said Human Rights at Sea CEO David Hammond Esq.

Last year, the 1998-built Gulf Sky (then sailing under the name Nautic) became entangled in a legal dispute involving American sanctions on Iran. In September 2019, Iranian nationals Amir Dianat, 55 and Kamran Lajmiri, 42, allegedly attempted to circumvent U.S. sanctions in order to buy the Nautic on behalf of Iranian petroleum interests – including the Islamic Revolutionary Guard Corps’ Quds Force, a U.S.-designated foreign terrorist organization. The U.S. Department of Justice brought charges of money laundering against both men, and it filed a civil forfeiture complaint to seize $12 million in funds that were allegedly routed through the U.S. financial system for the transaction. According to the DoJ, it was the largest seizure of IRGC Quds Force-related funds ever made.

The vessel has languished since while awaiting the outcome of a forfeiture case brought by her former owners. In June, her master reported that the crew had gone unpaid for months. HRAS joined with the ship’s flag state, Dominica, in working to secure compensation and repatriation for them. The Dominica Maritime Administration initiated proceedings against the operator and referred the case to mediation; however, as of late June the ship’s managers had not paid the salaries of the seafarers or signed them off.

U.S. officials have been informed that the vessel has disappeared, and joint efforts to locate it continue. “The Commonwealth of Dominica Office of Maritime Affairs and Marine Personnel is first concerned about the health and welfare of the crew and is abundantly concerned that the crew was coerced to pick up anchor and get underway knowingly violating international and domestic law. Secondly, this office will not rest until we know the whereabout of the vessel and its crew. We will engage in a multi-national effort to locate and promulgate the release of the vessel to immediately return to UAE waters,” said Eric R. Dawicki, the head of the Dominica International Ship Registry.